A spiral-cut ham is one sold already cut to the bone into thin, continuous slices for easy serving. Heating sliced whole or half hams in a conventional oven can dry out the meat, however, so to ensure a moist ham, America's Test Kitchen suggests avoiding those hams marked "ham with water added” and/or "heat the ham to an internal temperature of no higher than 120 degrees." 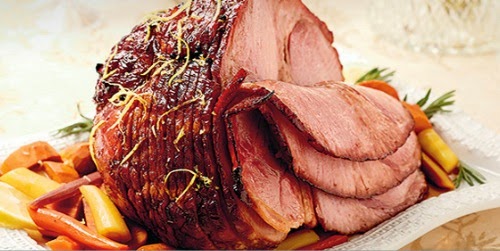 Finishing
Zest of one lemon or orange


Notes:   According to the USDA Food Safety and Inspection Service reheating instructions, individual slices may also be warmed in a skillet or microwave.

Spiral-Cut Ham with Port Wine and Citrus Glaze directions
Heat the ham
Preheat oven to 275°F. A low temperature is used here because the ham is fully cooked and requires minimal heating.

Remove ham from the wrapping and any additional covering; wipe ham with a clean towel. Place the ham in a roasting pan and cover entirely with heavy aluminum foil tightly. Heat according to package directions to warm the precooked meat to bring out its flavor and aroma.


Prepare Glaze
In a large saucepan over Medium-High heat, combine all of the Glaze ingredients and bring to a boil. Then, reduce heat and simmer until volume is reduced by half (to about 1 cup / 237ml), about thirty (30) minutes.


Apply and caramelize Glaze
After ham is warmed, remove foil and brush ham with about half of the Glaze to add flavor. Increase oven temperature to 400°F with the objective of caramelizing the Glaze on the meat's surface.

Return ham to the oven until the Glaze is bubbly, about ten to fifteen (10 - 15) minutes.


Serve
Remove ham from the oven, and brush remaining Glaze onto the top and sides. Sprinkle the citrus zest on the ham surface; serve warm.     Back to Top