Directions
In a shallow dish, whisk together the eggs and milk. Dip brioche in the egg wash on both sides, allowing it to absorb.

Heat butter in a large sauté pan over Medium heat; when butter foams, add brioche and cook, turning once or twice, until golden brown on both sides and cooked through. Remove from pan.

Place a piece of brioche on a plate. Top with half of the Nutella and half of the banana slices; sprinkle with salt.

Cover with a second piece of brioche. Repeat layers, ending with the third piec of brioche. Sprinkle Fleur de sel on top and serve warm.


Card File adapts Chef  Rocco Dispirito, however, I do not have a cookbook source. 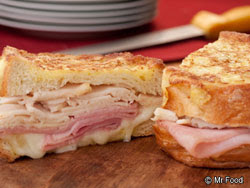 For serving
Cranberry sauce, on the side for dipping

Directions
In a medium bowl, whisk eggs and milk until well combined.

In a large skillet, melt 1 Tbsp butter over Medium heat. Dip two sandwiches, one at a time, in the egg mixture, coating completely. Place in skillet and cook 2 to 3 minutes on each side, or until egg is golden and cheese is melted.

Repeat with remaining sandwiches, adding more butter as needed. Slice sandwiches on the diagonal and serve immediately with dipping sauce, if desired.

Directions
Spread the butter on 1 side of each slice of bread and divide into two groups. Then, for one group, spread peanut butter on the other side. With butter-side down, place banana slices on top and drizzle with honey.

Place sandwiches on a preheated grill pan or griddle; when golden brown and crispy, flip over. When the sandwiches are browned on both sides, remove to plates. Slice in half diagonally and serve immediately.