Colcannon is a traditional Irish dish with as many variations as there are cooks in Ireland. 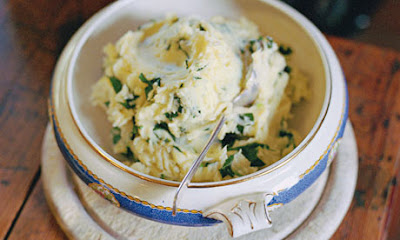 Directions
Prepare potatoes
Put the potatoes into a large pot, with the larger ones on the bottom; add water to come halfway up the potatoes. Cover the pot and bring to a boil over High heat. When the water begins to boil, carefully drain off about half of it, then return the pot to the heat, cover it again, reduce the heat to Low, and let the potatoes steam for about 40 minutes. Turn off the heat; cover the potatoes with a clean, damp tea towel; and let sit for 5 minutes more.


Wilt the greens
Melt 4 Tbsp of the butter in a large skillet over Medium-High heat. Add the kale (or assorted greens) and cook until just wilted, about 5 minutes.


Heat milk , butter, scallions / stir in greens
Combine the milk, scallions, and remaining butter in a medium pot and bring to a simmer over Medium heat. Cook for about 2 minutes; then add the greens and stir in well. Remove the pot from the heat, cover, and set aside.


Drain, peel, and mash potatoes with the greens
Drain and carefully peel the potatoes, then return them to the pot. Add the greens and their liquid and mash until smooth, leaving a few small lumps in the potatoes. Season to taste with salt and pepper.


Serve
To serve in the traditional Irish manner, push the back of a large soup spoon down in the middle of each portion to make a crater, then put a large pat of room-temperature butter into each one to make a "lake." Diners dip each forkful of colcannon into the butter until its walls are breached. 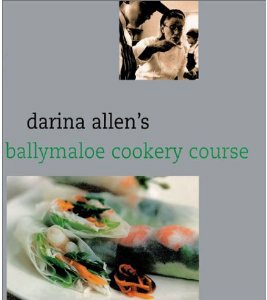 Directions
Prepare potatoes
Scrub the potatoes and put them in a pot of cold water. Add a good pinch of salt and bring them to a boil. When the potatoes are half-cooked, about 15 minutes, strain off 2/3 of the water. Put the lid back on the pot and cook over a gentle heat so that the potatoes steam until they are tender.

Prepare cabbage
Remove the dark outer leaves from the cabbage. Wash the rest and cut into quarters, removing the core. Cut the cabbage finely across the grain. Boil in a little boiling water or bacon cooking water until soft. Drain and season with salt, pepper, and a little butter.

Serve
For perfection,serve immediately in a hot dish with a lump of butter melting in the center.