This recipe is a variation on the Prudhommes' hugely popular dish called Eggplant Pirogue which has been adapted by a great number of South Louisiana restaurants, and is a testament to its overall popularity. Adapted by a writer in Lafayette, LA for the Examiner, this version uses eggplant slices rather than pirogues. 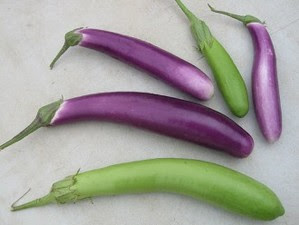 Eggplant Decadence Directions
Prepare the sauce
Place a large heavy pot over Medium heat, and add the olive oil and butter. Once hot, sauté the shrimp in two batches and remove to a plate.

Add the onions, garlic, chopped eggplant, and wine, and cook until the onions are clear.

Season quite heavily with seafood seasoning, and cook for five (5) minutes. The color of the sauce should be bronze.

Stir in the corn starch and water mixture in a steady stream. Once boiling, the mixture should be quite thick. Add the shrimp and crab meat, and then cook for five (5) minutes.

Taste and adjust seasoning. Reduce heat to Low, and add the green onions.


Fry the eggplant
Combine lemon juice and water in a bowl. Peel and slice five (5) of the eggplant into 1/2-inch discs and pass them through the water and lemon juice mixture. Then, place on a clean towel to dry.

Chop the remaining egg plant, and reserve to use in the sauce.

Preheat oil in a large heavy pot to 350°F over Medium-High heat; use a frying thermometer to check the temperature.

Using a whisk, mix the eggs and some (3 Tbsp) seafood seasoning in the milk.

On a sheet pan, combine the flour, breadcrumbs, and seafood seasoning (4 Tbsp). Dredge the eggplant through the egg and milk mixture, and then through the flour and bread crumb mixture being sure to coat all sides.

Immediately fry in the heated oil until golden, about three to five (3-5) minutes; be sure not to overcrowd the pot, and do turn half way through.