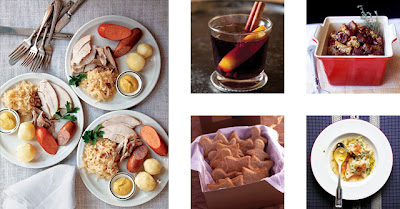 "According to German folklore, those who don't eat well on Christmas Eve will be haunted by demons throughout the night."

Maultaschensuppe (Dumplings in Broth)
(A specialty of Swabia in southern Germany)

Spinach Salad with Hot Bacon Dressing
(For the vegetarian guest, keep the spinach salad's hot bacon dressing
on the side, and also offer a simple balsamic vinaigrette.)

Spiced Wine
This recipe is from Mimi Sheraton, The German Cookbook
(Random House, 1965).