Tipsy Trifle with Peaches and Cream | The Shiksa Blog

I saw this gorgeous dessert on Zabar's while I looking for infused olive oils to make Marinated Mushrooms. Many summers ago, my mother went to the orchard to pick peaches. As an annual ritual, she and my sister stocked their pantries with home-canned peaches and brandied peach jam (unfortunately, we don't have those recipes). Nevertheless, this sounds like a great dessert. 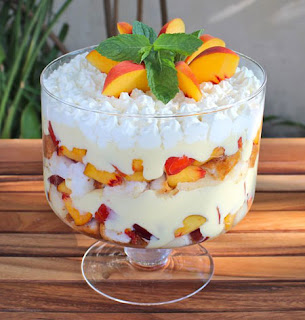 
The recipe calls for Superfine Sugar which you can learn about here. 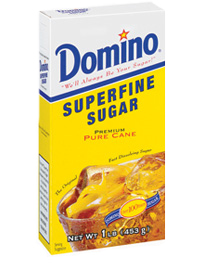 Tipsy Trifle with
Peaches and Cream ingredients
Makes 10 to 12 servings
For cake:
One Angel food cake from the bakery, cut into 1-inch cubes

Directions
Step by Step Photos
Total Time: 2 hours
For trifle, place cubed peaches in large mixing bowl and toss with 2 Tbsp of the rum, 2 Tbsp of the peach nectar, and 1/3 cup sugar until the peaches are evenly coated; set aside at room temperature for at least 30 minutes.

In a mixing bowl, whip 1/2 pint of heavy whipping cream with 3 Tbsp sugar and 1/4 tsp salt until soft peaks form.

Beat in the soft set vanilla pudding until the mixture becomes rich and creamy; set aside.

To assemble dessert, place half of the cubed cake in an even layer at on the bottom of a 3.5-QT trifle dish. Sprinkle half of the rum/peach nectar mixture across the cake cubes to evenly moisten the cubes.

Either spread the whipped cream/Mascarpone mixture across the top of the trifle, or use it to pipe a decorative pattern. 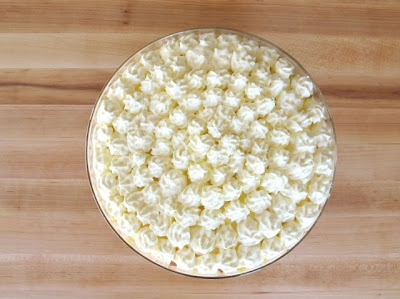 Now that the trifle is assembled, refrigerate it for two to three (2 to 3) hours or overnight until serving.

Just before serving, garnish the trifle with the peach slices and fresh mint. Serve well-chilled. Store in refrigerator. 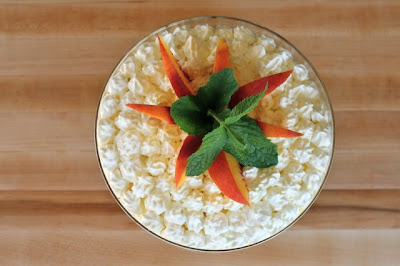